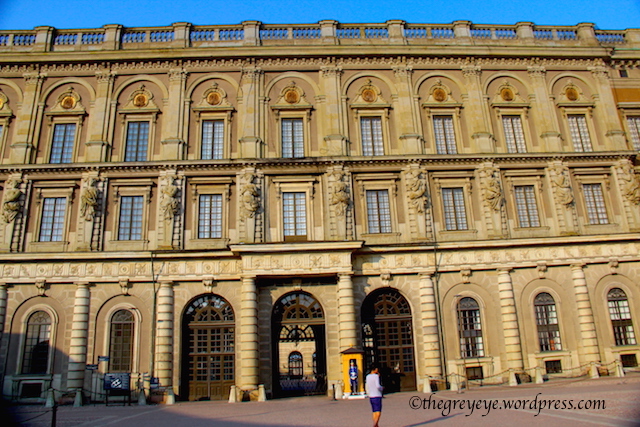 The Royal Palace of Sweden is  situated in Stockholm in the old town, Gamla stan. The area is Stadsholmen meaning island of the city. In fact five different islands together form Stockholm, the capital of Sweden, among them Stadsholmen holds the Kungliga slottet  or the king’s castle. It has four different facade and the blue water of baltic sea is not far from the palace. We went to the palace after our ferry ride was over. The boat dropped us just in front of the palace. But different ferry ride may have different routes , so it is better you confirm with them if the ferry goes to the palace or not. Ours were the one included in the Stockholm card 🙂 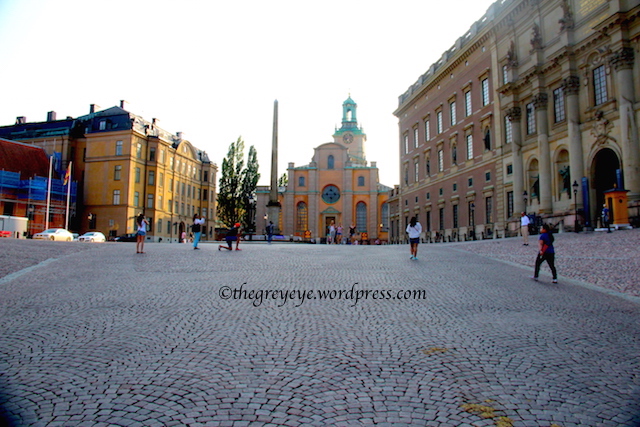 The royal palace is the official residence and major royal palace of Sweden Monarch. It was built in the same place as the medieval Tre Kronor Castle which was destroyed in a fire. It was designed by architect Nicodemus Tessin, and took several years to be completed, due to the Northern war in between. 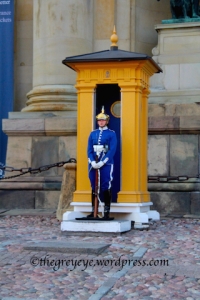 The royal guards of the Palace are selected from a wing of Swedish army, and they are the personal protection of the King and queen since 16th century. The changing of royal guards is an annual ceremony in each summer and attracts large number of tourists from all over the world. Though I am not sure all of them are female or not, but a large portion of them are.  I had an opportunity to talk to one of them, she told me it is a rotational duty, 4-6 hours, twice a  week, as they have to stand all the time. She also let us took her picture 😀 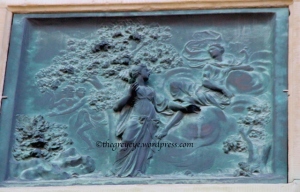 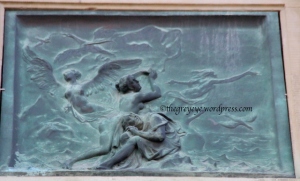 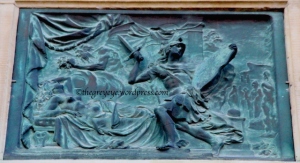 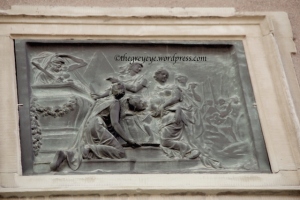 Over the windows of the ground floor  in Southern Facade, there are 16 reliefs made in 1699 to 1700, by the French artist René Chauveau. They are made of bronze, In the 1890s, the reliefs were mounted on the southern facade, where they replaced a row of windows of the same size. The corresponding windows still exist on the northern facade. The relics delineates different motifs including Perseus & Andromeda, Apollo slaying the python etc. 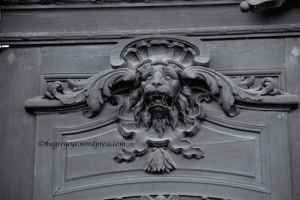 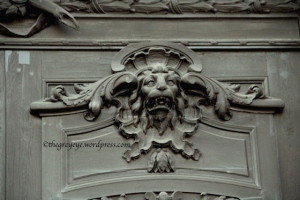 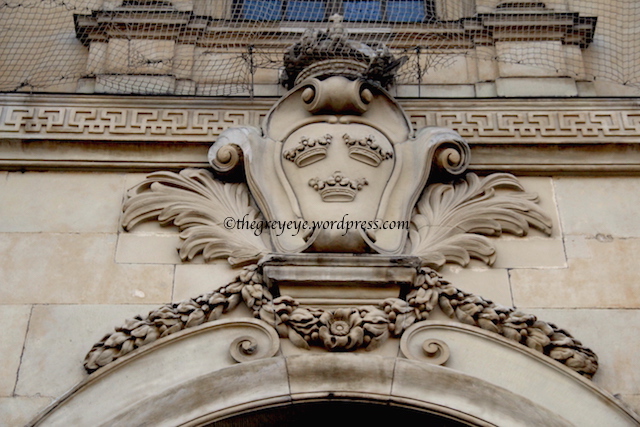 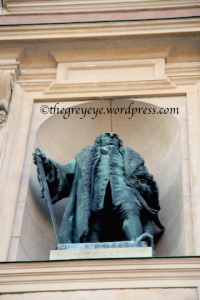 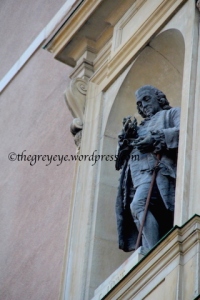 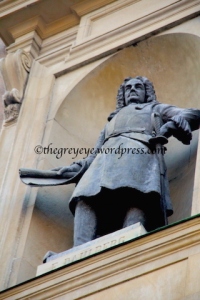 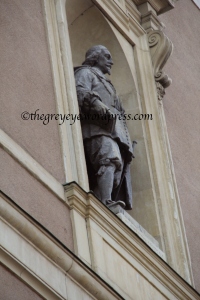 The palace also hold the Treasury, the royal chapel and the Hall of State.

The southern facade is the most ornate, with statues, sculptures and reliefs.  There are statues of notable Swedish men including the architect’s own statue. In other statues, the most attractive is the  Abduction group consisting of four sculptures made of bronze (two to the right and two to the left side of the South Arch), illustrates the abductions of women and are made by Bernard Foucquet the elder, at the beginning of the 18th century. 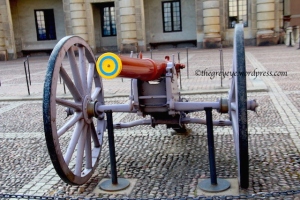 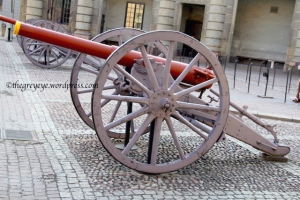 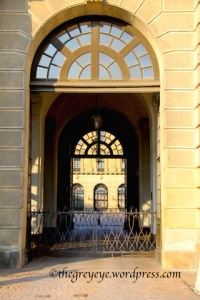 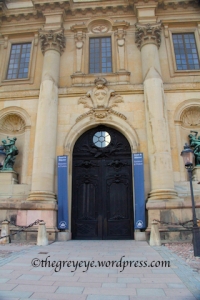 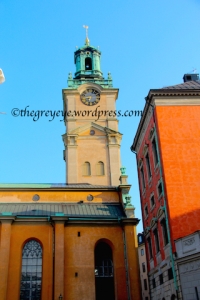 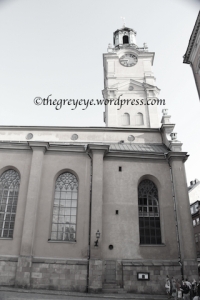 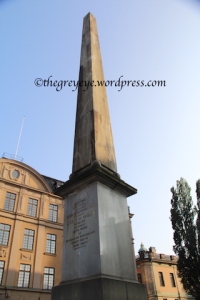 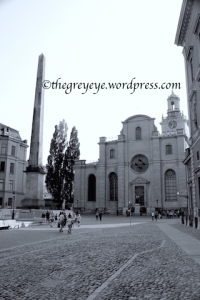 The location of the Palace has made it a greater attraction to the travellers. First of all the amazing view of the Baltic sea  from the castle (above) is an interest to the photographers as well as to the tourists. Many of them sit there for sometime in summer to enjoy the view. Secondly, the narrow streets of Gamla stan can be seen directly from the palace, creating the cozy but mystic environment of an old town. 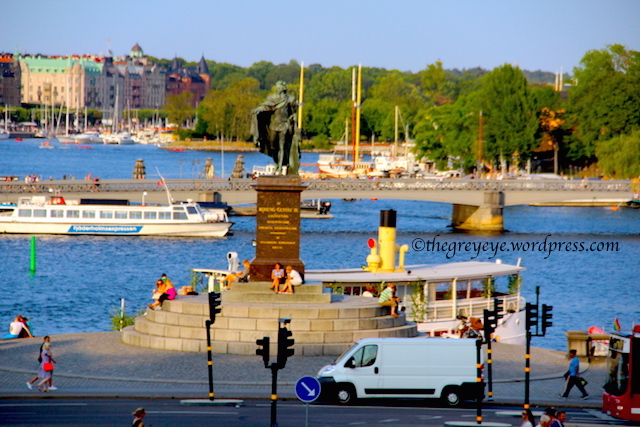 We did not have much time, so we covered the palace quickly. Then we entered the narrow streets of Gamla stan from the backside of the palace. The streets are full of antique and souvenir shops and one of the must visit in Stockholm.

© thegreyeye.wordpress.com, 2015-21. Unauthorized use and/or duplication of this material without express and written permission from this blog’s author and/or owner is strictly prohibited. All rights reserved. 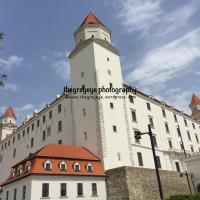