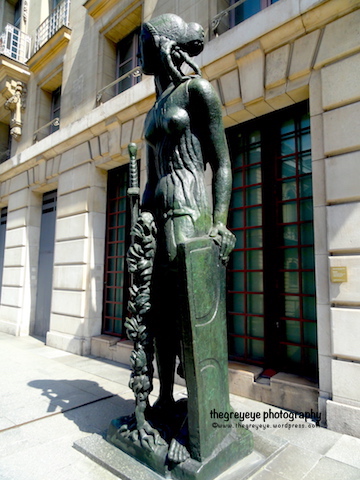 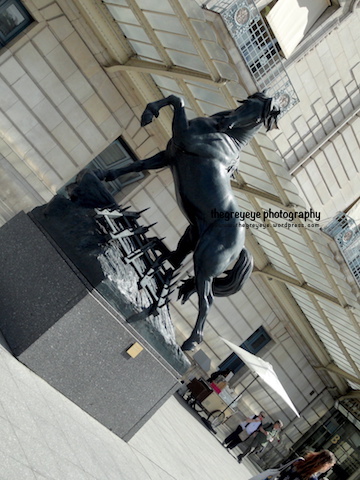 In my 5th visit to Paris, I was determined to see Musee d’Orsay or  M’O called by artists and visitors. On the left bank of the Seine, the museum was installed in the former Orsay railway station, Gare d’Orsay. Built in 1900 to designs by Victor Laloux, Lucien Magne and Émile Bénard. It served as a terminus for the Paris-Orléans Railway. It was the first electrified urban rail terminal in the world, opened 28 May 1900, in time for the 1900 Exposition Universelle. “So the building itself could be seen as the first “work of art” in the Musee d’Orsay, ” displaying collections of art from the period 1848 to 1914. 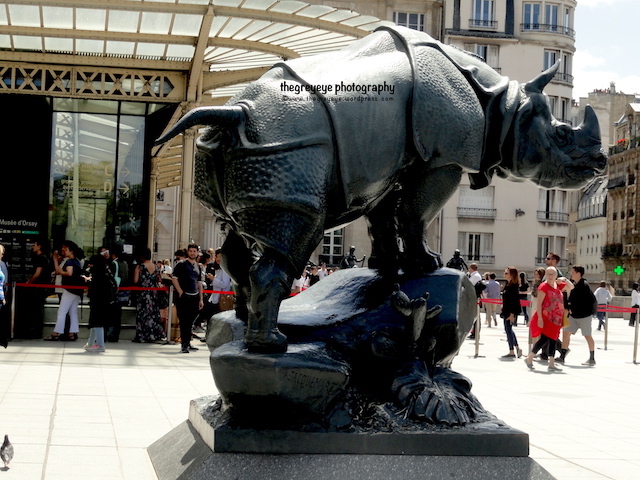 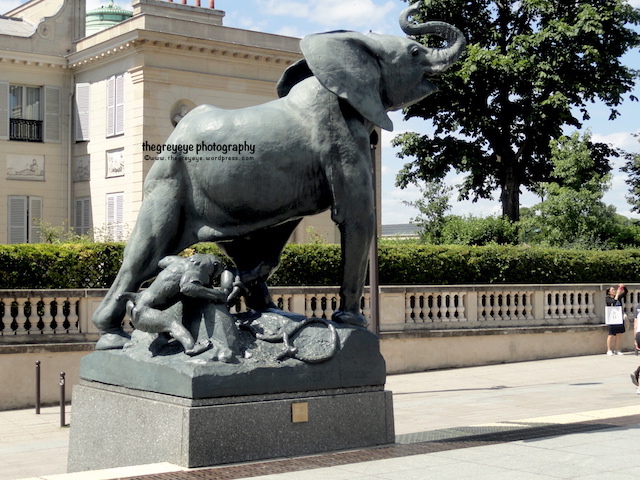 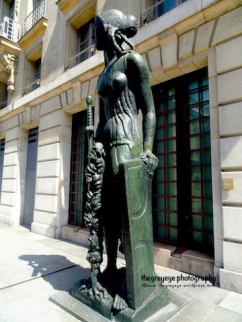 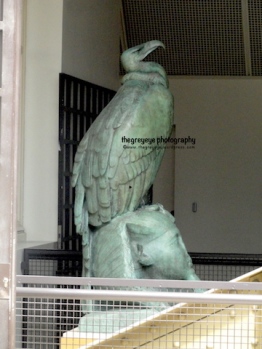 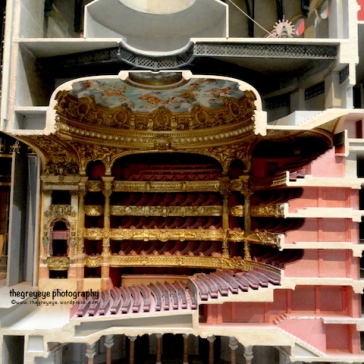 It took Thomas Couture three years to complete The Romans of the Decadence the proportions of which betray grand artistic ambitions. He wanted to give fresh impetus to French painting and to do so referred, rather conventionally, to the masters of ancient Greece, the Renaissance and the Flemish school. The work is a history painting, regarded as the noblest genre during the 19th century: it therefore had to represent human behaviour and convey a moral message. This was explained by Couture himself, who quoted two lines from the Roman poet Juvenal, (c. 55-c.140 AD) in the catalogue for the 1847 Salon where the painting was exhibited: “Crueller than war, vice fell upon Rome and avenged the conquered world”. 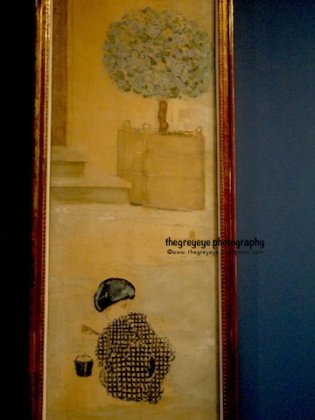 This scene, dated 1849, shows the first ploughing or dressing, which was done in early autumn to break the surface of the soil and aerate it during the winter.
Attention is focused on the first team of Charolais-Nivernais cattle, whose light russet and white coats gleam in the cold, pale light. It is primarily an animal painting, and the heroes are the oxen themselves, leaving little room for the men: the cowherd is a diminutive figure. It is a hymn to agricultural labour, whose grandeur was magnified because, in these post-revolutionary days, it was easy to contrast with the corruption of the city. It is also tribute to provincial regions – here the Nivernais, with its agricultural traditions and rural landscapes. 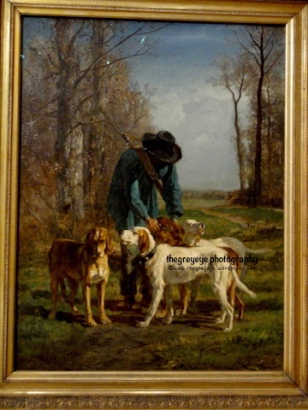 Before his early death in battle during the Franco-Prussian war in 1870, Frédéric Bazille ,during a summer holiday in the family home at Méric, near Montpellier, worked on this motif in a fairly large painting showing ten of his close family gathered on the terrace, and adding himself at the far left of the painting.The strong contrasts show Bazille’s liking for the light of the South of France.
Almost all are looking towards the spectator as if at a camera. As a result, although it is a group portrait of family life, the postures are rather stiff.  Bazille reworked the canvas extensively during the winter and returned to it again a year later after it was shown in the Salon, replacing little dogs with a contrived still life. These hesitations and compromises probably explain why his painting was accepted by the Salon in 1868 while Monet’s more daring compositions were refused. Bazille was surprised by this, modestly writing that the jury had accepted him “I don’t know how, probably by mistake.” 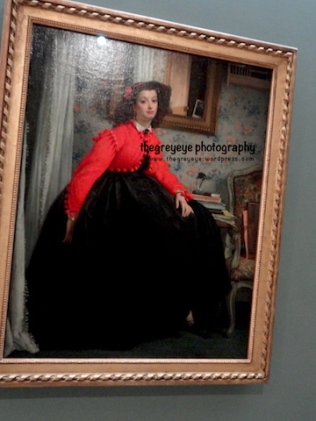 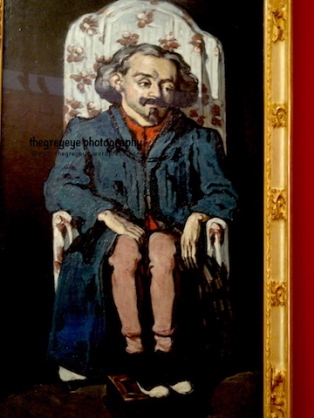 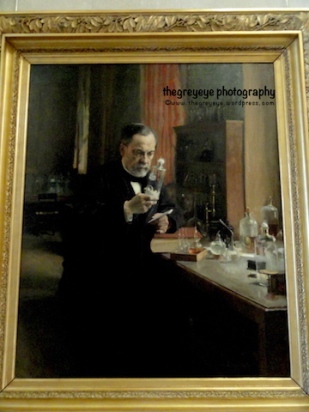 Aristide Maillol Woman with a Parasol(right) 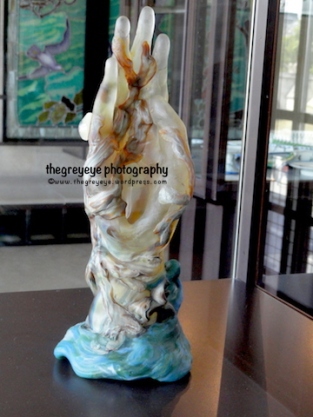 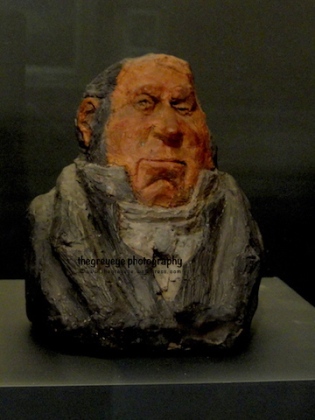 Most probably this is the most famous painting in this museum. In April 1888, he wrote to his brother Theo: “I need a starry night with cypresses or maybe above a field of ripe wheat.” In June, he confided to the painter Emile Bernard: “But when shall I ever paint the Starry Sky, this painting that keeps haunting me”.
He first painted a corner of nocturnal sky in Cafe Terrace on the Place du Forum, Arles (Otterlo, Rijksmuseum Kröller-Muller). Next came this view of the Rhône in which he marvellously transcribed the colours he perceived in the dark. Blues prevail: Prussian blue, ultramarine and cobalt. The city gas lights glimmer an intense orange and are reflected in the water. The stars sparkle like gemstones.  The Musée d’Orsay’s Starry Night is more serene, an atmosphere reinforced by the presence of a couple of lovers at the bottom of the canvas.

Trained first in Montauban and then in Toulouse, Bourdelle started work as an assistant in Rodin’s studio. From 1905, Bourdelle sought to simplify his lines: “Contain, maintain and master are the rules of construction,” he told his pupils over and over again. He looked to mythology for many of his subjects such as Hercules the Archer which enabled him to experiment on a large scale. In his own terms, Apollo was “undertaken in an attempt to master the purest aspect of my deep vision, going far beyond all past flights, I brought to it – more than human blood, bone, cartilage and muscles – the enveloping structure of its forces.”

Maillol started his career as a painter, then designed tapestries and made decorative wooden objects in the Art Nouveau style. His first sculptures date from 1895-1896. The first were three small reliefs, carved in roundels of wood complete with the bark, and highlighted in colour: this Dancing Woman, a Woman with a Mandolin and a Woman Sitting in a Thoughtful Pose, which is in the Musee Maillol. 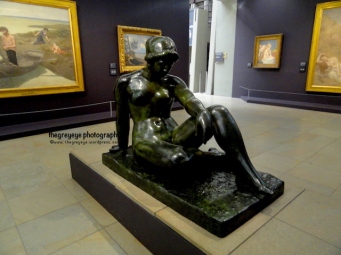 For many years, Pompon was one of the most sought-after assistants in Paris, hewing blocks of marble for Auguste Rodin and Camille Claudel. But after 1905, in reaction to Rodin’s expressionism, Pompon abandoned the human figure and turned to the animals focused on “the very essence of the animal”. Polar Bear is the finest achievement of his, when it was exhibited at the Salon d’Automne in 1922, it brought the artist tardy recognition, at the age of sixty-seven. 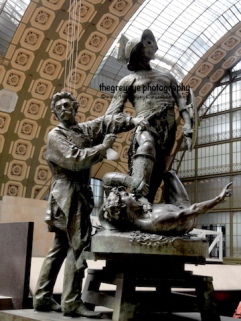 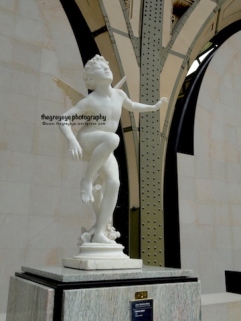 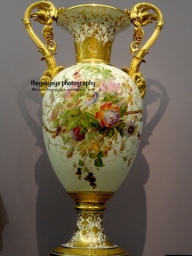 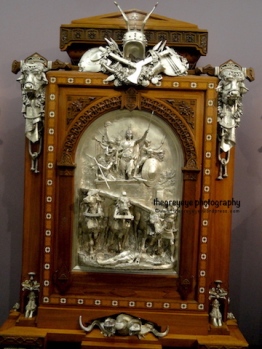 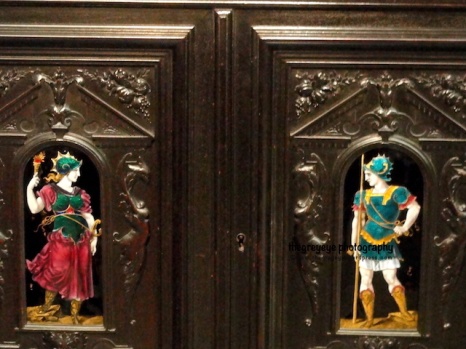 The square in front of M’O represents six bronze allegorical sculptural group in a row, originally produced for the Exposition Universelle: 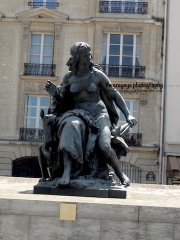 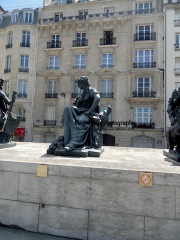 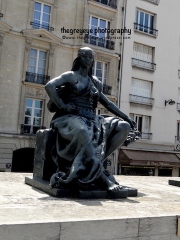 ©thegreyeye.wordpress.com, 2018-21. Unauthorized use and/or duplication of this material without express and written permission from this blog’s author and/or owner is strictly prohibited. All rights reserved. 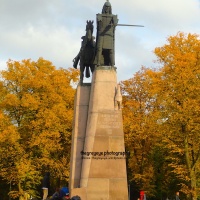