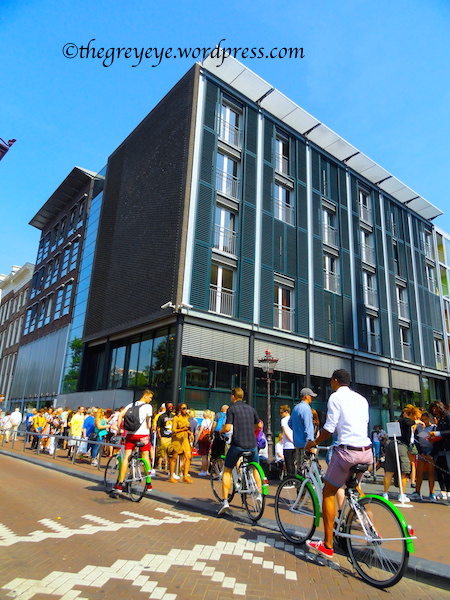 It was a must for me to visit the Anne Frank house, while visiting Amsterdam , like many other travellers. It is a deeply emotional place for me as I read the book in the same age as she wrote the diary. At that time, I was not well aware of the history of WWII that time, except for the brief chapter in my school history book, but I started writing my own diary after reading hers! And I know, my lovely readers, you already know so much about her. But still I am going to repeat some events from her life, as  this little post is my tribute to her ..

Annelies Marie Frank is born  to Otto and Edith Frank on June 12, 1929 in Frankfurt am Main, Germany. First few years of life were best time for the family according to Edith.The problem started gradually , and grew frightening when in July 1932, the NSDAP becomes the largest party with 37% of the votes. Members of the Storm Troopers march through the streets singing “When Jewish blood splatters from the knife” songs, as recalled Otto frank later.

Otto was a very intelligent man, knowing for sure that they have to leave! He wrote to Cara in a later  after the war: “ I had to face the consequences, and though this did hurt me deeply, I realized that Germany was not the world and I left my country forever.”  (Source: Cara Weiss Wilson, Dear Cara: Letters from Otto Frank.) 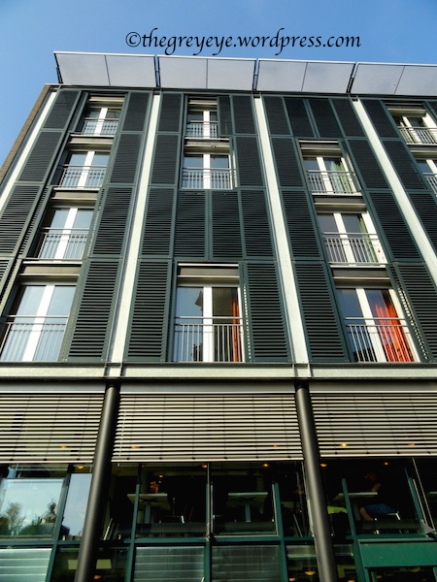 Anne writes about their immigration in her diary that as they are  jewish, the family emigrated to Holland in 1933, where Otto became the Managing Director of Dutch Opekta Company which manufactures products used in making jam.But not whole family together. First her mom and dad emigrated.   Margot and Anne were sent to Aachen, to stay with their  grandmother. Margot went to Holland in December and she followed in February, where she was presented to Margot as birthday present. They started feeling life will be normal again, Otto took care of the business and Edith, of the household. Girls started schooling and making friends.. but bad days were not far !!

In May 1940 The Netherlands was invaded. There were many restriction coming for Jewish people. They must were yellow stars, they are not allowed to trams, cinema, ice-cream parlour or many other places. Soon Jewish children were no longer allowed to regular school. Anne started going to  Jewish Lyceum, where her  big sister Margot was also studying. When Margot receives a call-up for a German labour camp, Otto and Edith were extremely afraid.  Anna  was stunned. She was started visualising  the dark damp concentration camps and lonely cells. Scared as hell, they moved to their secret hiding place the very next day.

The free days were gone forever! So her diary become her best friend in the secret annex.  They shared the place with  Hermann and Auguste van Pels with their son Peter, and Fritz Pfeffer. The entrance to the Secret Annex is concealed behind a movable bookcase. Father Voskuijl, the warehouse manager, constructs the movable bookcase to conceal the entrance to the Secret Annex. Anne considered the annex as the best place of hiding in Amsterdam, if not in Holland,

They hid in that place almost 2 years. The war became worse and only source from the outside news were through the helpers or a single radio shared by all 8 people. She writes “Today I have nothing but dismal and depressing news to report. Our many Jewish friends and acquaintances are being taken away in droves… transporting them in cattle cars to Westerbork, the big camp in Drenthe to which they’re sending all the Jews. Miep told us about someone who’d managed to escape from there. It must be terrible in Westerbork.”[Diary of an young girl by Anne Frank] 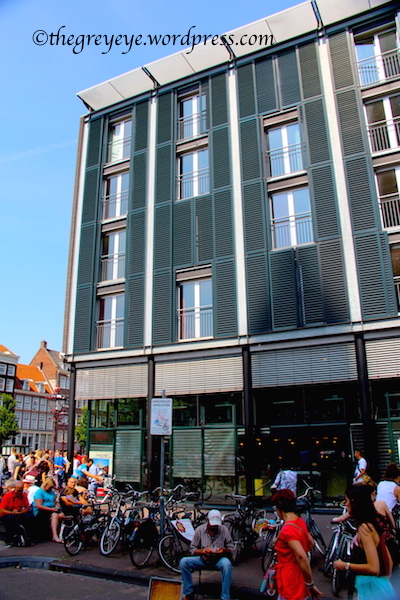 While visiting the house, taking photos are not allowed inside. The museum authority writes: we understand it can get very emotional for many of our visitors and we do not allow photography inside. Indeed, it can be. The  movable book case is still there and the wooden stairs. There are video documentaries, and quotes all around. Even the attic she wrote about in her diary remains, except visitors cannot go there. There is a huge glass mirror through which you can see the attic.

Anne started writing her diary  since her 13th birthday. From that time on Anne wanted to be a writer, and wished her diary would be published as novel once the war is over. She knew she can write, her stories are good, her descriptions of the Secret Annex is vivid and presentation was funny. She wanted to be a writer and thought she can really be a good one. And she was right.. The diary has since been published in more than 60 different languages.

The people from secret annex were betrayed by somebody, whose identity was never revealed.In a sunny morning , when all the residents of secret annex were unaware and least expect it,  the door opened and a man was standing with a gun in his hand pointing towards them and they were forced to surrender. 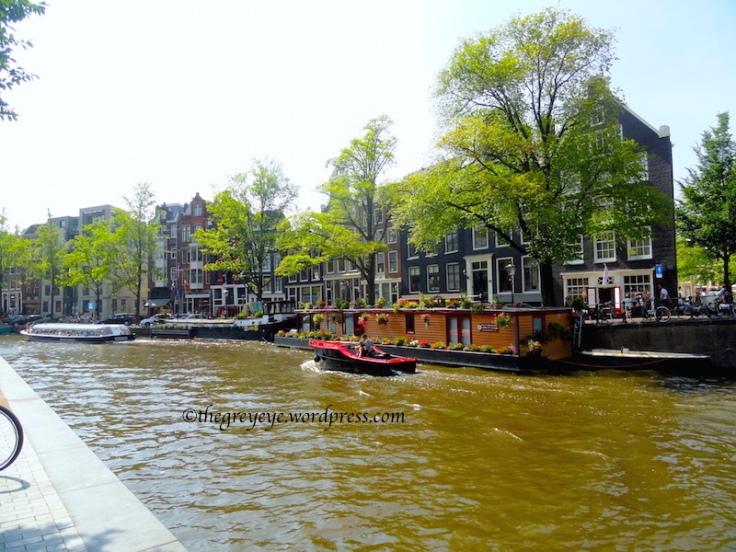 The manuscript, written on loose sheets of paper, was found strewn on the floor of the hiding place by Miep Gies and Bep Voskuijl after the family’s arrest. They were kept safe and given to Otto Frank after the war, with the original notes, when Anne’s death was confirmed in the autumn of 1945.Later, Otto and his second wife Elfriede Geiringer spent a large part of their time educating people about the importance of Anne Frank’s diary and the horrors that the Jews experienced during the Holocaust. Later,Anne’s stepsister Eva Schloss  wrote her own story as holocaust survivor, she still lives in London.

These photos show the backside of the house. 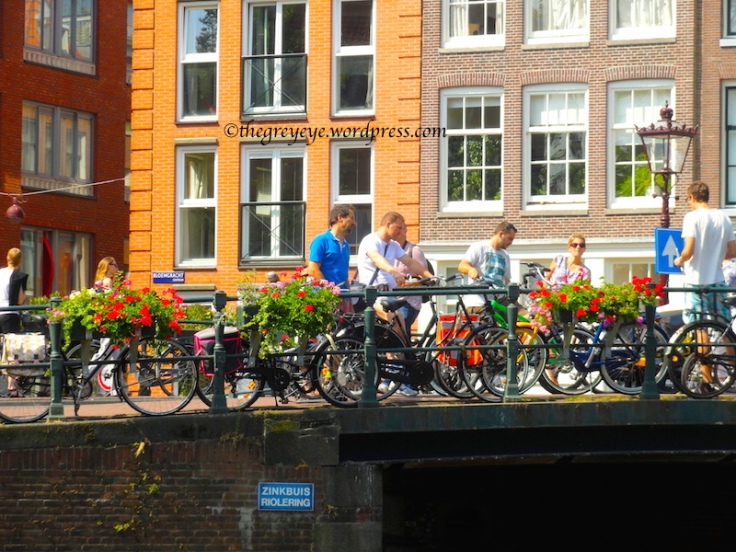 “Statue of Anne Frank, by Mari Andriessen, outside the Westerkerk” 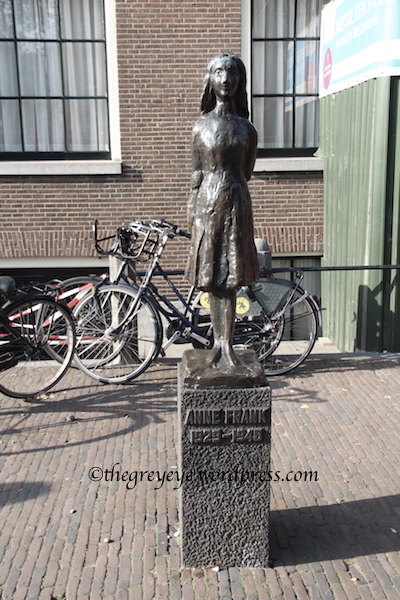 The inhabitant of secret annex were arrested and transports to Westerbork, the men and women were separated.Anne with her mother and sister were deported  to the infamous Auschwitz concentration camp and arrived after a three-day journey.On 28 October, selections began for women to be relocated to Bergen-Belsen. More than 8,000 women, including Anne and Margot Frank, and Auguste van Pels, were transported, while her mother died in  Auschwitz-Birkenau. Irony is they survived the selection , they were not sent to gas chamber. still Anne while aged 15 years and Margot, 19 yrs died  in Bergen-Belsen contracted by typhus ,only a few weeks before British soldiers liberated the camp on 15 April 1945…